I've moved to Battambang, Cambodia and am blogging from there now.  You can have a look at my practical guide to Cambodia's most laidback city over here https://thatbattambangblog.blogspot.com/ 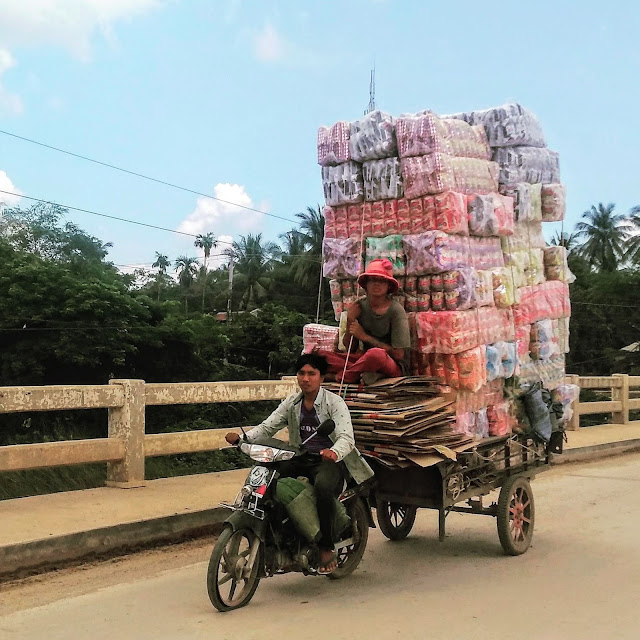 Time came to leave India after 7 years, it's been a fantastic home to us but the wanderlust hit in again. Lots of changes have taken place in the life of me and the man but here we are in Battambang, Cambodia, time to dust down the blog and make a fresh start.
Updates and info on life in Cambodia's sleepiest city coming your way soon.
Posted by amasc at 16:37 4 comments:

Monsoon is moving on

This is my sixth Mumbai Monsoon and the heaviest and longest we've had in years.  It's reaching the end now but it's not going out with a whimper.

My first Mumbai Monsoon wasn't great to look at although the weather was gloriously wet and fresh.  The flat I was living in had bars on the windows and overlooked a big blank wall so there was little pleasure in the way of views.  My classroom, while big and colourful with plenty of borrowed light, was internal so, again, no outside views.

Things have changed and I now have no shortage of things to look out onto both at work and at home.  So back to Monsoon.  The rains have been heavy and welcomed and lengthy and the skies have often been dramatic in a leaden sort of a way.  Here's a recent view from my new classroom window at 10am: 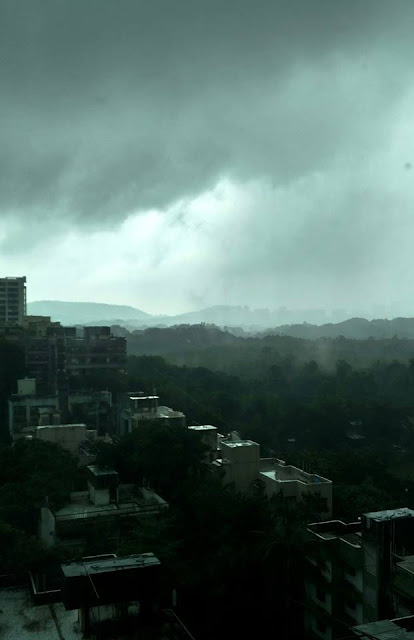 I love the rains but you can have too much of a good thing and I was starting to yearn for a bit of a break from the constant cloud cover.  No sooner said than done.  On Friday, this was the view from the flat: 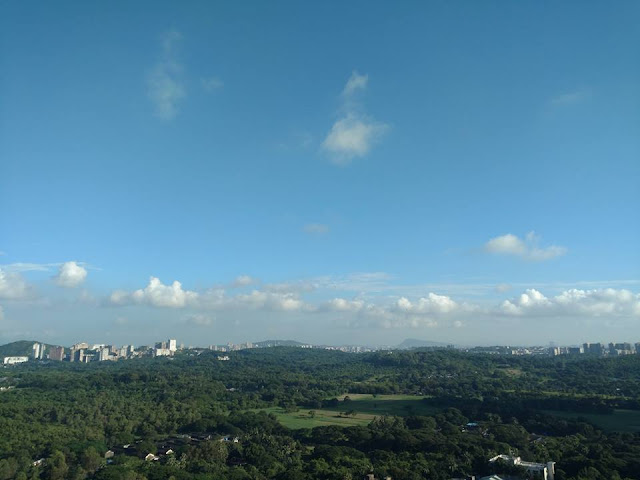 Big and blue and beautiful and very, very welcome.
Posted by amasc at 08:13 71 comments:

As a foreigner I find medicines are very cheap in India.  Locally produced versions of just about anything you can think of are freely available and I know lots of people who stock up on medicines to take back to family members, particularly people from the USA.

However, medicines must have very narrow profit margins as pharmacies also sell a wide range of other products.  Some of them make sense, blood pressure monitors, thermometers and food supplements.  Toiletries are another line so if you need toothpaste, soap or shampoo your local pharmacy is  a good place to go looking for it.  Other things stretch the imagination, biscuits, chocolate, potato crisps but they fill a space on the shelves and they must sell or they wouldn't be there.  The most puzzling is dog food. 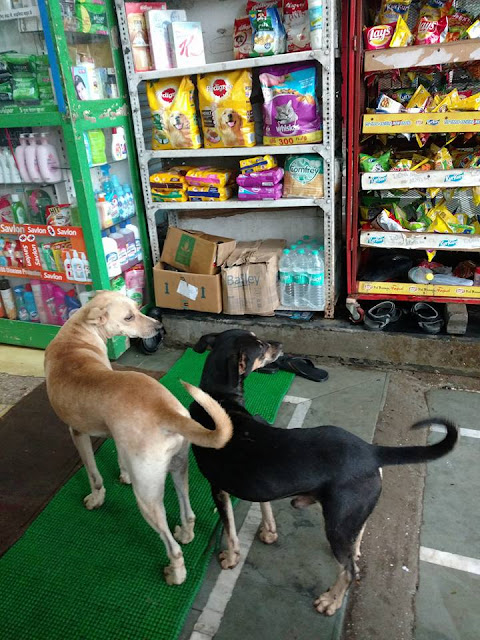 Every pharmacy I've visited apart from those inside  hospitals has a shelf of dog and cat food.  I have no idea why but the local dogs seem happy about it.
Posted by amasc at 11:52 3 comments:

A Tale of Two Settees

It was the best of times, it was the worst of times.  Well, not really but it was absolutely time to get rid of the awful brown and saggy sofa and replace it with something, anything, else.

We chose a pair of red sofas from Pepperfry – online marketplace for furniture, which were slated for delivery on Thursday evening.Of course they arrived at 3, when we were still at work. A friend headed up to the flat to let them in while we were tied up with different meetings.  We fortunately live close to our workplace.

Of course security weren’t keen on letting them in but we got that sorted, then, of course, one of the sofas was too big for the lift. So the men carried up 29 floors!

It was beige, it was big and beige and sitting outside the flat.

Pepperfry told us they had a no returns policy, not true, it got returned but only after much wrangling. They offered compensation of 5000 INR – 58 GBPs – to keep the big beige mistake, we laughed. They told us they didn’t have any red ones in stock, they did, we could see them on their website. They told us it was hard to check the colour of products in their warehouse, it was written on the outside.

The beige mistake sofa fitted in the lift after all and went on its way. 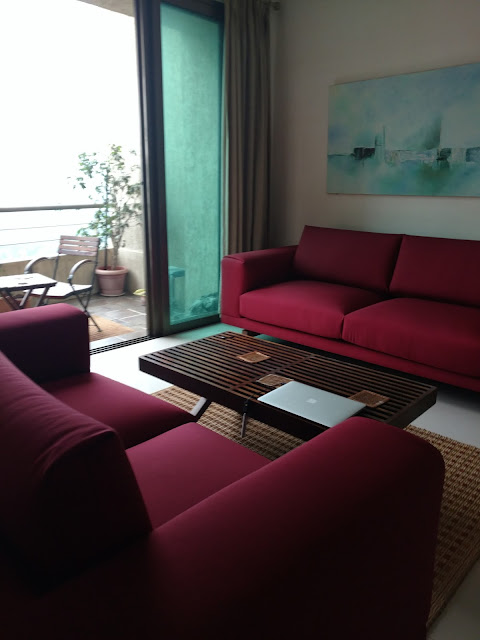 They told us they’d deliver the sofa in the right colour on Friday. It arrived on Saturday, of course it bloody did.
Posted by amasc at 18:18 2 comments:

Scotland Part 2 and it's still raining

It was a short trip but a happy one.  We took an Air bnb in Edinburgh to be close to the visa office, good food and friends.  We even had a friend from the US came to visit with us.  And it rained and rained and rained.

We spotted the elusive Deep Fried Mars Bar, I don't personally know anyone whose eaten this but it's certainly available for the brave or foolish who want to give it a try: 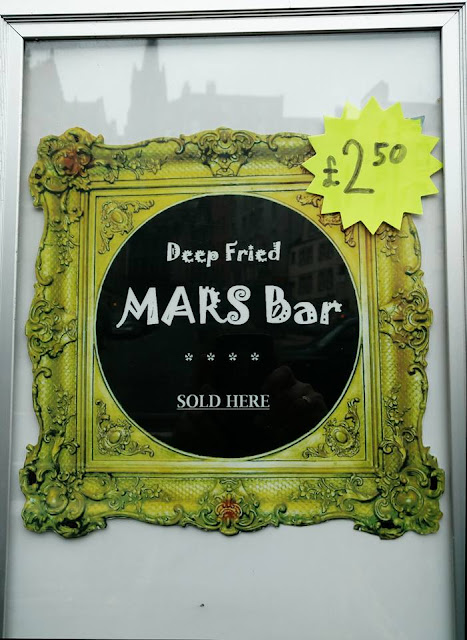 Scottish optimism was very evident in the tables set on the streets outside restaurants, cafes and bars.  Some of the popularity of this comes from a complete ban on smoking inside and some from an inbuilt aspect of the Scottish character that believes, no matter how crap the weather, that it'll brighten up soon.  It seldom does: 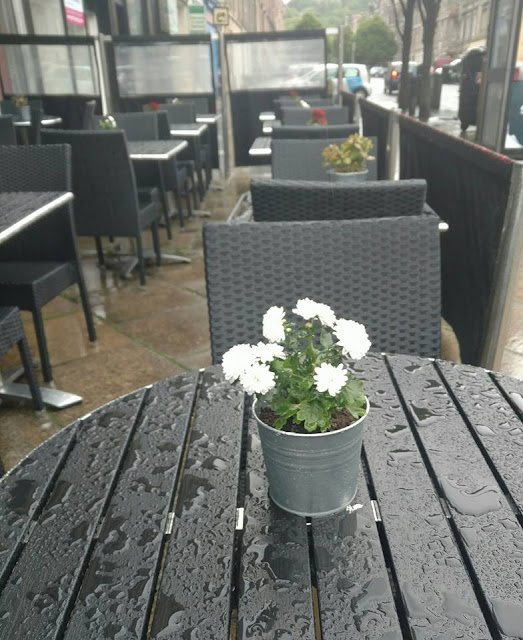 There were big doses of nostalgia. It's been ten years since we left Scotland with only two brief visits back.  Greyfriars Bobby is one of the icons of Edinburgh, a dog so loyal to his owner that, after the master's death, he set up a vigil on his grave in Greyfriars Churchyard.  You can see his own dog memorial stone inside the churchyard and his nose gets worn away by visitors rubbing it for, well, whatever reason they rub it.  He's on nose number two now: 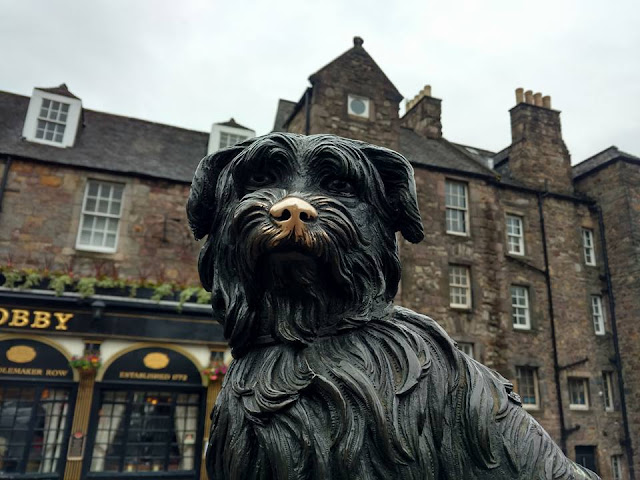 We came back loaded with haggis, mustard, oatcakes and few other delicious bits and pieces.  The oatcakes and English mustard are long gone and the haggis is getting doled out very sparingly in the form of an IndoScottish fusion which pays tribute to both countries enjoyment of a deep fried snack. Haggis Pakora: 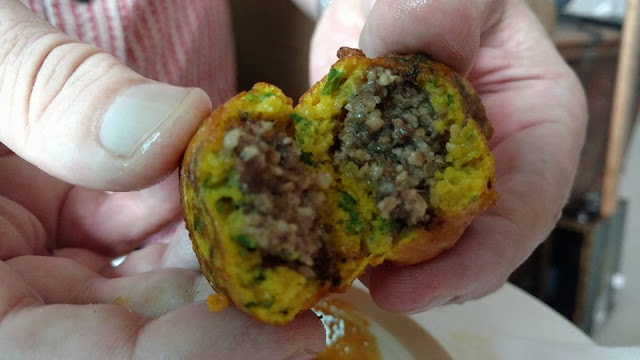 We took a very rare visit to the homeland this summer.  Leaving just as the monsoon broke over Mumbai and arriving in Scotland on a day so hot and still that we were able to sit comfortably in pavement cafes and marvel at the weather.

It wasn't to last, every day since has been cold, or wet, and more often cold and wet. However, it does make for a lot of fresh looking greenery. 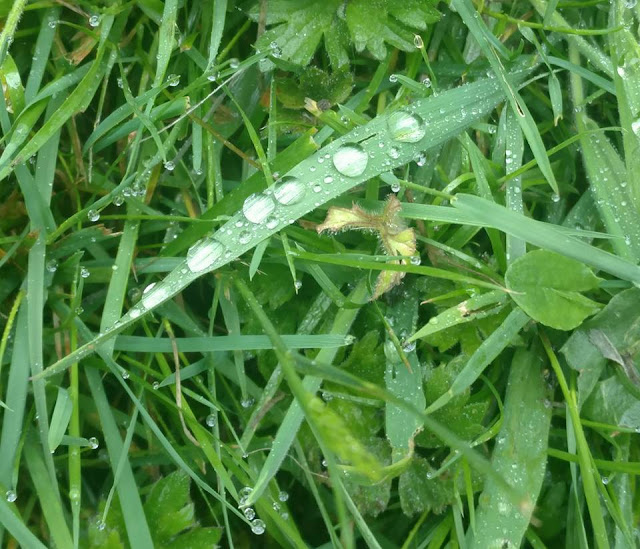 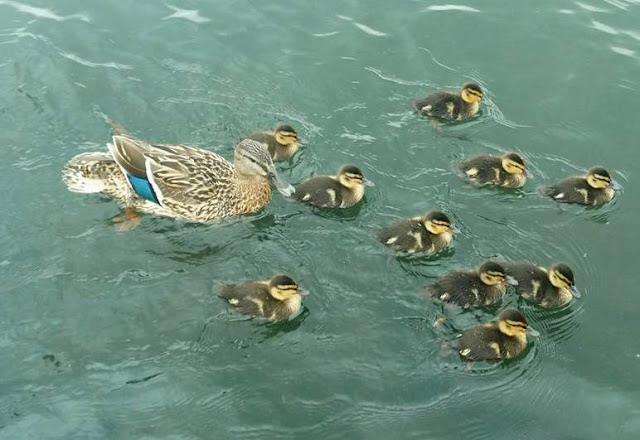 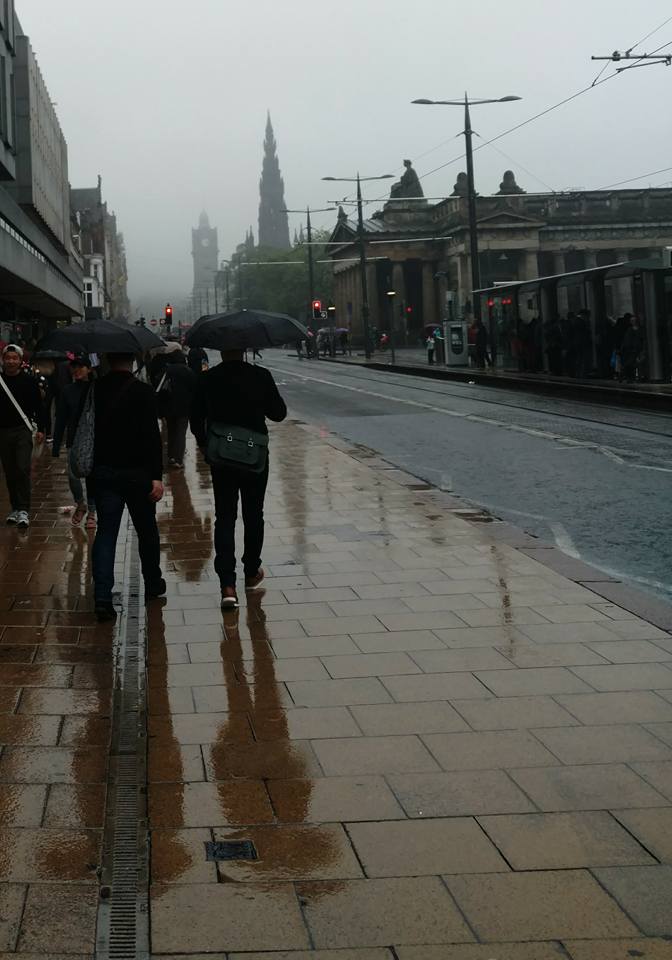 3:30 pm, June, Princes Street, Edinburgh
It's been great catching up with people we haven't seen for years and stuffing ourselves with food we can't get in India but I'm looking forward to getting back to warm rain and not having to dress in multiple layers to cope with the weather.
Posted by amasc at 23:13 7 comments: 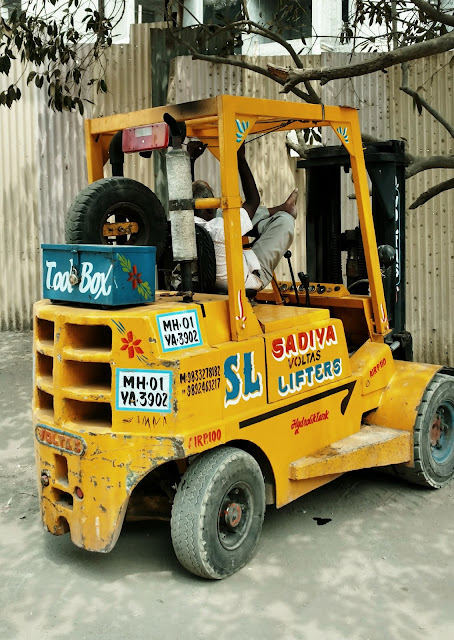 The decorated truck is one of the classic sights of India.  Look closer and you'll notice that it's not just trucks that get gussied up.
Posted by amasc at 16:45 2 comments:

It's been a while since I posted a picture looking down from our flat in the sky.  There's a window cleaner in this picture. 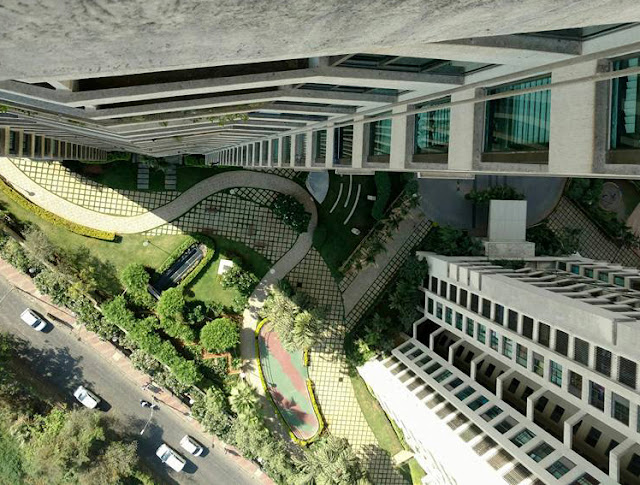 The windows are cleaned twice a year, around now and then again after Monsoon.  One person does them all, around 3.5 thousand, and all hanging from a rope.  Can you see him?
Posted by amasc at 06:46 4 comments:

It's mango season, specifically Alphonso mango season.  The flat is full of their seductive and decadent scent and I know they're not going to last long. 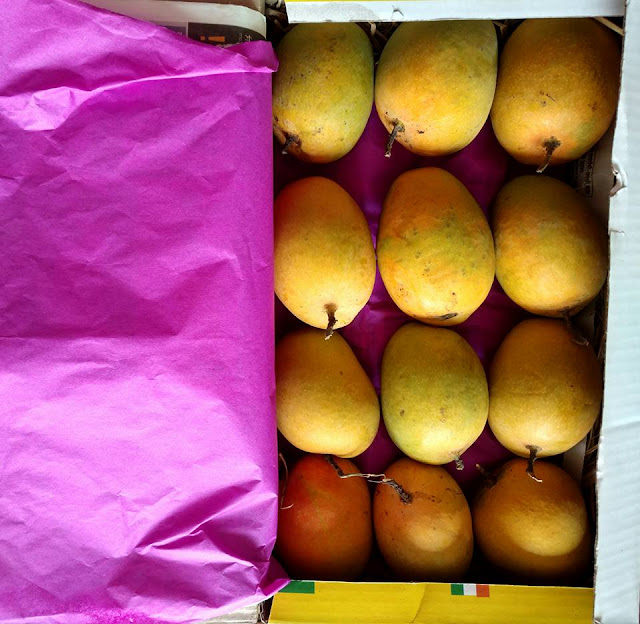 I'd had a tantalising few chunks of Alphonso in a fruit salad during my recent holiday to Goa and that seems to have kickstarted my mania for mangoes.  The price starts high and drops as the supply increases and typically I'd wait until the price had dropped a bit but I threw sense to the wind in favour of scent and don't regret it a bit.

I like to squeeze their flesh until it's soft then suck it out through the skin, the man likes his neatly sectioned on a plate but whatever way you want to eat them, the Alphonso is the richest, the most perfumed the most delicious fruit I've ever experienced.

It won't be the last box this season.

amasc
From Scotland to Vietnam, to India and now in Cambodia. I'm currently in Battambang, Cambodia.